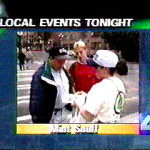 About a thousand Mariner fans who came to a Mariner’s baseball game on September 24, 1998 at Seattle’s King Dome were greeted by four dental hygiene students from Shoreline Community College who gave out information on the dangers of chewing tobacco as well as free samples of All Mint Pouches, the new non-tobacco alternative. The event drew several television news reporters. Seattle station KOMO-TV featured the students in a special report.

Coordinator of the event, Linda Anderson of Lynnwood, Washington along with some of her fellow students, Michelle Libby, Barb Burns and Shannon Surrbeck, wanted visitors to the game to know that smokeless tobacco is dangerous and there are things people can do to quit. The four dental hygiene students gave away samples of Mint Snuff All Mint Pouches, a non-tobacco alternative for those who smoke or chew tobacco . The product is also being used as a popular breath freshener and mouth moistener for athletes. 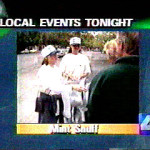 “The people coming to the game were very receptive to our giving out samples and getting materials to read,” stated Anderson. “At first we were a little apprehensive but in just a few minutes we all saw how open people were and had a ball giving out the information.” The students gave out over 3,000 samples of Pouches which were stapled to a Mint Snuff consumer brochure. All four students wore All Mint Pouch T-shirts and white Mint Snuff hats. All supplies were donated by the Oregon Mint Snuff Company.

Washington is undergoing an alarming increase in the number of people using chewing, or “spit” tobacco. Over 12 million people in the United States use some form of smokeless tobacco. The largest increase in use over the past decade has been among young people from the ages of 8 to 17 years. In some parts of the nation, such as in the southern states and in Alaska, children are introduced to smokeless tobacco as early as two years of age as a part of their culture and heritage. Efforts by the American Cancer Society and other organizations to spread the word about the dangers of chewing tobacco have been helpful, and a growing number of dentists and hygienists are now becoming involved.

Introduced to the market nearly a decade ago, Mint Snuff products have been strongly recommended by dentists, hygienists, county health departments and many other health professionals as the premier alternative for patients who want to quit tobacco. Research has shown that many people, especially adolescents, use spit tobacco for it’s perceived image when they have have a “ring on their rear” and is considered a social thing to do with their friends who chew. It has been shown that chewers can readily substitute the mint alternative for their tobacco thus immediately avoid the dangers associated with tobacco while still yielding to peer, social and behavioral pressures.

Visitors to the game were able to read about the dangers of smokeless tobacco from the literature provided by the student hygienists and experienced for themselves the vibrant and powerful new product that has helped so many people. “This was just a trial run for programs we are planning in the spring” reported Anderson. “This event was so much fun, we hope to go to several more games when the new season starts.” 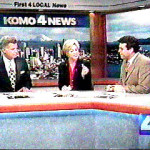 Over two hundred dental practices throughout Washington as well as health education centers at Fort Lewis, McChord AFB, Bangor Submarine base, Bremerton Shipyards and dozens of colleges throughout the state are already recommending Mint Snuff products to patients.

Congratulations to these four professionals for their dedication and hard work to spread the word about the dangers of spit tobacco!!!