When you watch a young man’s face cut away in order to get rid of a cancer caused by smokeless tobacco, you get more than a little mad at the tobacco industry, confesses Dr. Dan Laizure, a dentist from Walla Walla, Wash., who took on the tobacco industry early last month on their own turf, the rodeo. 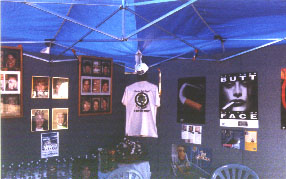 For the second consecutive year, Dr. Laizure brought his coalition of health care organizations to the Walla Walla Frontier Days and Rodeo. He and his staff, along with the National Spit Tobacco Education Program, American Cancer Society, Oregon Mint Snuff Co, and the Tobacco Intervention Network were at the rodeo, which receives heavy sponsorship from the smokeless tobacco industry. His booth, just a few feet away from the spit tobacco booth where they were handing out free samples of tobacco, made quite an impact with rodeo visitors. Dr. Laizure and his staff also had black neckerchiefs printed with the caption: “Don’t Screw With Chew” and “Only Dips Dip” which they gave out at the fair. 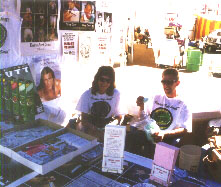 Dr. Laizure has a unique method of helping patients quit using spit tobacco. “For addicted chewers, I recommend they switch completely or mix their tobacco with a safe non-tobacco alternative called Mint Snuff All Mint Chew produced by the Oregon Mint Snuff Company in Tillamook, Ore.” The product is available at grocery and convenience stores. For a store near you call 1-800-EAT-MINT

“Ours is a phase-out process.” Laizure said. “The person must first decide to quit. Then he chooses which flavor of Mint Snuff product he wants to use in the weaning process: Mint, Wintergreen, Cinnamon or Spearmint. The patient mixes Mint Snuff with tobacco at a 1 to 3 ratio then, over the next few weeks, uses less tobacco until they use straight Mint Snuff.” “If they feel they need to use ‘chew’ in a social situation,” continued Dr. Laizure, “they have that option without risk of restarting with tobacco.”

Dr. Laizure estimates he has helped more than a dozen patients quit this year and many more are in the process of quitting. Laizure never charges any patient for his services in connection with this program. Once informed that the rodeo could potentially lose thousands of dollars in prize money provided by the tobacco industry, Laizure put the challenge out that if his coalition is able to raise the prize money, would the rodeo management ask the tobacco industry not to return next year in order to make it a “spitless rodeo”? The answer is yet forthcoming, but Dr. Laizure is collecting funds and putting out challenges to other dental societies throughout the United States to mobilize and do the same thing in their community. “We dental professionals have to make a stand if we are going to see the horror and tragedy caused by spit tobacco come to a halt,” said Dr. Laizure.Dan Laizure

Dr. Dan Laizure is a honor graduate of Portland State University where he received a Bachelor of Science degree in Biology and went on to earn his dental degree from the University of Oregon School of Dentistry where he graduated with honors in 1977. He has won numerous awards including the Mosby Scholarship Book award, American Academy of Implant Dentistry Award, and the Academy of General Dentistry Award. He is a member of the OKU National Dental Honor Society, Delta Phi Omega a honorary dental study club and also is a member of Delta Sigma Delta a dental fraternity, the ADA, WSDA, and Walla Walla Valley Dental Society. He is a fellow in the Academy of General Dentistry and a member of the Crown Council. Dr. Laizure also has a strong interest in cosmetic and restorative dentistry and is a member of the American Academy of Cosmetic Dentistry.In 1981 he began private practice in Walla Walla. He is a member of the ADA, the WSDA and the Walla Walla Valley Dental Society. He is also on staff at Walla Walla General Hospital and is a consulting dentist at Park Plaza Nursing home.In 1986 Dr. Laizure was appointed by the Governor to the Washington State Board of Dental Examiners as one of the youngest dentist to ever be asked to serve. Dr. Laizure is currently in the process of publishing a book of humorous anecdotes related to dentistry and is a local radio personality. He also is a facilitator for a seminar series called “Dental Boot Kamp” and participates in seminars from Vancouver, Canada to San Antonio, Texas. Dr. Laizure is married and has three children and one grandchild. He enjoys outdoor activities and sports as well as the practice of dentistry. He is a fifteen year member of the Rotary Club.